Why Blockchain Will Impact the Financial Sector 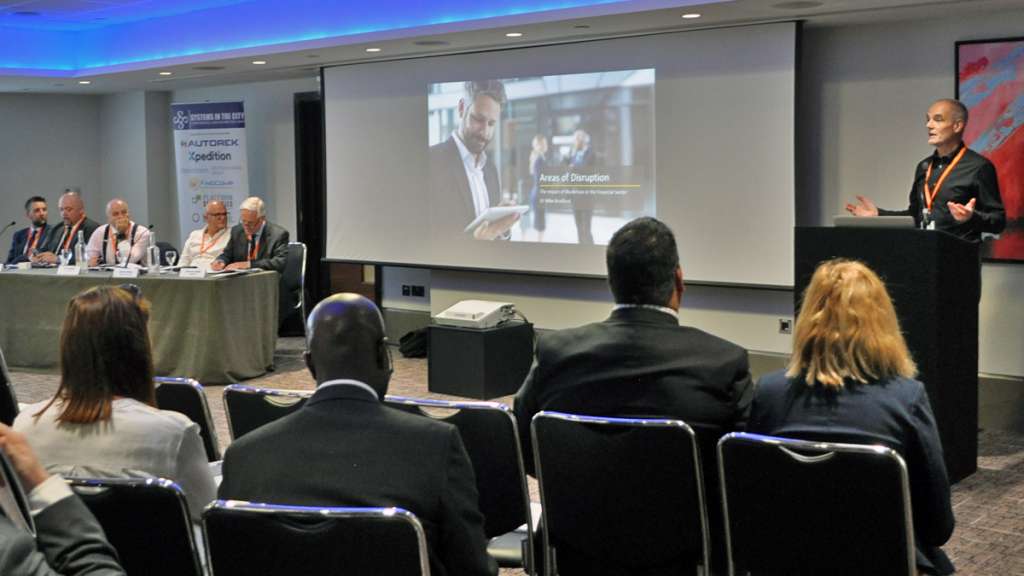 At the recent Systems in the City Conference hosted by Goodacre in London, I had the opportunity to speak to delegates about blockchain. How prominent an issue is this among wealth management professionals in the UK? We got a sense of this when, before my talk, a show of hands at the conference revealed that Coinbase had little brand recognition among the audience.

Should people have heard of Coinbase? Well, they moved from a $1.6bn valuation in August 2017 to an $8bn estimated valuation in April 2018, and at 11.7m active users in October 2017 they actually have more “investors” using their platform than stock brokerage Schwab. Coinbase launched an Index Fund for US accredited investors in March 2018.

Coinbase are about as “mainstream” a brand as you can imagine in the cryptocurrency world, and, as the above figures show, are managing a large and still-growing global business. How can this not be on everyone’s radar?

Part of the reason is that wealth management deals in large figures all day. Another speaker on the panel represents an exchange operator whose average daily clearing volumes are €35bn. But part of the issue is that the blockchain phenomenon has arisen so quickly that a lot of established professionals – and their firms – are still not aware of the significance of the technology.

This is exactly the reason we are speaking to our clients about blockchain now: because it’s vital to take the disruption potential seriously. This can either be a positive opportunity or a threat, depending on how late you leave it to get educated.

Will blockchain technologies have an impact on wealth management? Absolutely: wherever you look in the financial sector, you find areas of business-as-usual which are prime targets for disruption.

Here are the key points I went through in the talk:

The best known blockchain is the Bitcoin blockchain. Announced in a paper under the pseudonym Satoshi Nakamoto in 2008, the first open-source Bitcoin client was released in January 2009. Since then, bitcoin the cryptocurrency has reached as high as $325bn market cap and peak daily transaction volumes of over $23bn.

But blockchain technology is available for a wide range of applications, firstly evident in a huge number of competing cryptocurrencies, and secondly in a growing list of business startups and applications that are built on blockchains without solely depending on a currency or payments aspect.

Here’s how a blockchain operates to record a transaction of value from A to B: 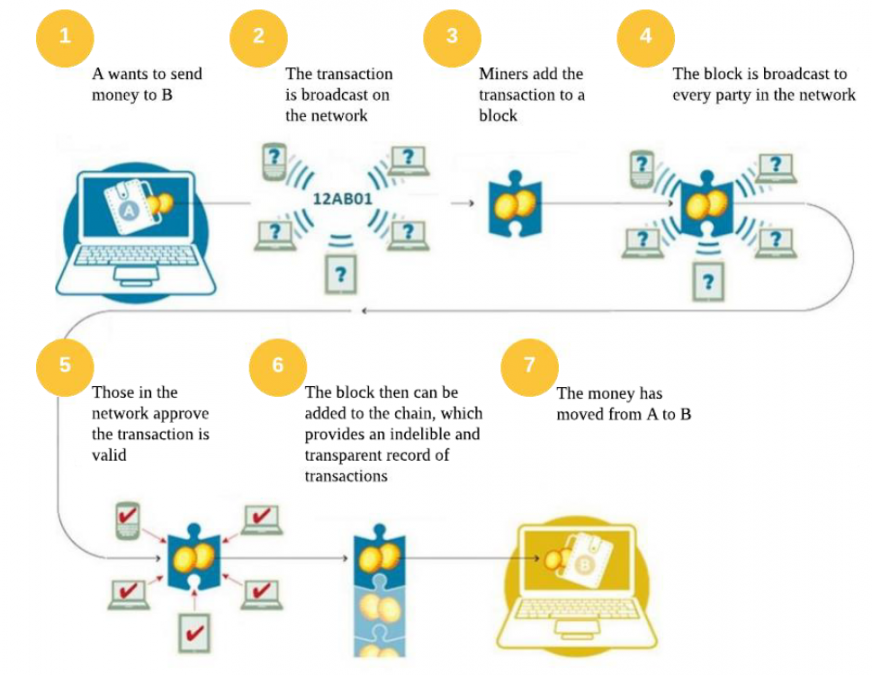 It’s mostly of technical or academic interest how all of this works, and the conference audience didn’t seem too enthusiastic about taking up my offer of a dive into Merkle Trees or Fermat’s Little Theorem. But you don’t need to be a mathematician or cryptographer to see what a difference blockchains will make to systems compared to traditional databases.

The key characteristics of blockchain to pay attention to are:

Putting these together we have a solution to a problem that’s at the centre of all financial transactions and record-keeping: trust.

With a blockchain ledger, it is not necessary to trust any party you transact with – a fundamental issue in how two organisations, such as banks, have had to deal with for centuries. Via a mathematically proven system that everyone can see and validate, when money (or any other units of value) move from A to B, it has happened and there is no need to wait for a middleman to say it’s valid. Everyone in the network can see the transaction and everyone can see when it’s confirmed… and once you receive your payment with enough confirmations from the network, it can’t be reversed.

Cutting out the middleman

Contrast these two views showing how transactions flow in the traditional financial world, and the way things are done in blockchain:

How it works today 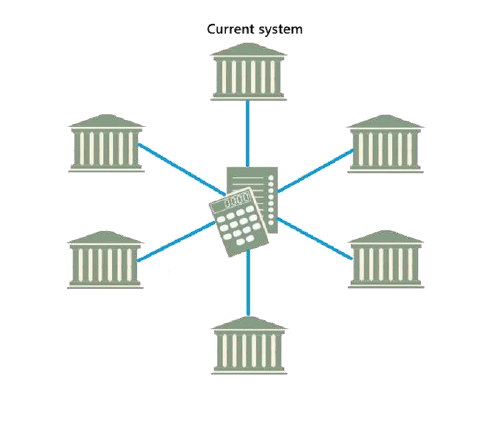 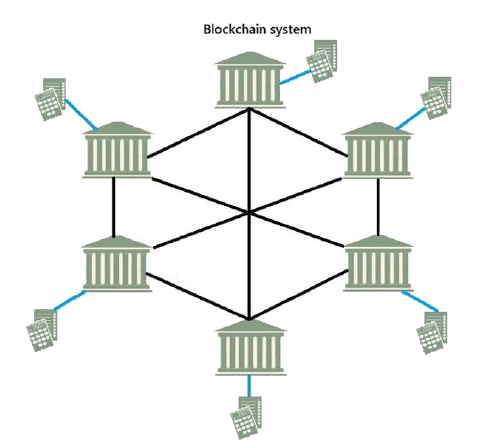 At a glance you can see that the “middleman”, as a trusted third party, has disappeared. There is no need for a central ledger if everybody participating in the system has a full copy of the ledger that they can verify, and that’s updated in everyone’s copy virtually as soon as transactions are entered.

Since every sequence of manual validation in the financial world brings with it inefficiencies, the opportunity for errors, and costs, we ought to be very excited indeed about any technology that can give us a reliable way of transacting both directly and transparently with each other.

Here are the key points, valid for any blockchain not just Bitcoin, to get your head round:

Without needing any central authority – a potential central point of failure, which is what we have in all traditional financial systems – we now have an alternative way to record transactions and balances in a way that everyone can transparently verify and trust.

Once you start digging into blockchain technology you will come across ‘mining’. Mining is the way that new blocks are generated in public blockchains, and in theory anybody can expend their computing power to compete with other miners to generate valid blocks, which are bundles of validated transactions to become part of the unchangeable blockchain. Public blockchains incentivise mining by allowing miners to reward themselves with newly generated coins. This incentive is key to allowing a virtually ownerless shared global system to exist: indeed, some have said that bitcoin is the solution that allows the blockchain to run, rather than vice versa.

However, mining is what gets bitcoin bad headlines for excessive electricity consumption, as well as fuelling a dubious arms race of hardware development that has affected world prices of PC components. Luckily mining in this fully open and competitive form is not necessary for the commercial applications of blockchains that will be most relevant to the financial sector.

In the same way that the future blockchains used by banks and financial institutions won’t depend on bitcoin the currency, they won’t have to follow all the details of the its public distributed computing model either.

Private – or ‘permissioned’ – blockchains allow businesses to set up blockchain systems within restricted networks of approved peers. In such systems, central control over the technology and rules are exerted in order to achieve a more predictable and specialised implementation of blockchain for specific business purposes.

The best known permissioned blockchain is Ripple, which is the name both of their cryptocurrency, and of the company which offers services including creation and running of private blockchains. Systems like this run their own highly controlled networks of nodes, control who acts as transaction validators, and determine who can write new blocks into the chain. Any business or partnership of organisations can set up their own private blockchain, given the right know-how.

The benefits for businesses are as follows:

Some of the most ambitious features of Bitcoin are lost in this approach, but the core benefits for business of distributed ledgers can be preserved provided a network is well enough constructed to offer resilience and fast sharing of data.

By taking the public blockchains like Bitcoin as specialised cases, the financial world can pick and choose the aspects of the technology that they wish to adapt for private transactional systems. It’s not the purist vision of the original Bitcoin white paper, but it’s a realist approach that widens the appeal for the entire world of business and finance.

Wherever you look in the financial world, you encounter the requirement for trusted third parties so that you can transact business. In fact, what you commonly find is multiple steps or layers of parties validating transactions and passing along to the next party.

Even in digital transaction systems, if you look into how they work, we have dematerialised the flow of information, but we certainly haven’t decentralised it.

I am convinced blockchain will be transformative anywhere there is a commercial benefit to reducing or eliminating intermediaries.

Here you can see whole spectrum of financial use cases that will be affected by blockchain:

Wherever you see middlemen or multiple steps to audit and validate transactions, there will be new business models arising to use blockchain to disintermediate and connect transacting parties directly with each other.

The disruption will not be limited to core financial institutions: blockchain is going to offer new ways of working wherever you find trusted third parties as intermediaries, particularly in insurance, back office processes, trade finance, and compliance.

This is far beyond mere hype: here are some significant projects to consider –

Since this industry disruption is a question of “when” not “if”, businesses need to build blockchain into their digitalisation strategy and try to act as leaders, not wait until they are late followers.

I actually think the regulators love blockchain. The complete visibility of data on a blockchain empowers the supervisors and will likely eliminate a lot of data sharing and access work currently dealt with. In a private blockchain, regulators can be added into the circle of trust and will be able to do their jobs in real time, such as detecting systemic risk as soon as it develops.

If you look at data integrity in current financial systems, the biggest enemy is always within. If a balance is just a value in a database, what about that database administrator, or a software error within your own systems? Blockchain ledgers offer the promise of data secure against any tampering.

Another area to consider is the disruption to services and potential security breaches from targeting of centralised databases, including denial-of-service attacks. By removing a single point of failure, blockchain systems by their nature offer better resilience in a world increasingly full of mass automated attacks. It’s for reasons like this that I think adoption of blockchain technology will actually lead us to spend less time on regulatory supervision, not more.

So from what we’ve seen, do you believe blockchain will it turn out to be not just over-hyped, but ultimately useless, like the cold fusion of the financial world?

I don’t think so – this time I believe the hype is justified and blockchain is an inexorable trend everyone’s going to have to get their heads around.

What can financial institutions and wealth managers do? First, get educated: add cryptocurrencies and blockchain to your news radar and watch out for partnerships and pilots involving established firms: there’s something new announced almost every day.

Secondly, look at your own systems and processes that are most hampered by intermediaries, linear data movements, and manual data processing. Consider blockchain in your mix of solutions for improving efficiency.

Thirdly, look at how you can become more open to integrations. This means allowing your users to pull their data out of your systems to manage it in someone else’s system, and how to help users in your system pull in data from other places. Becoming more aware of API-enabled integrations will prepare you for the coming wave of blockchain-based data sources.

At CREALOGIX we create digital leaders, and so it’s vital we support our digital banking and wealth management clients with cutting-edge functionality and integrations. In May this year we launched CREALOGIX Invest Crypto, a product allowing you to offer your customers an integrated view of cryptocurrency investments within a traditional portfolio dashboard.

This is one part of our CREALOGIX Invest wealth management platform, in which your customers can engage with their entire financial universe in a unified interface for the first time, on mobile, tablet, or desktop.

As well as integrating cryptocurrency balances and valuations into a portfolio view, CREALOGIX Invest Crypto offers connections to your chosen exchanges via their APIs, and voice control with Siri to provide personalised position summaries.

As elsewhere in our digital banking products, we help you liberate data that’s locked away in legacy systems or in disparate sources, to make a better user experience and build differentiation in your relationship with your customers.

Contact CREALOGIX to find out how we can support you in becoming a digital leader.